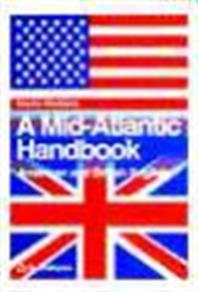 by Marko Modiano
Observers of English are becoming increasingly aware of the differences between the two major varieties of the language: American English and British English. In theory, speakers of Mid-Atlantic English, a form of English which includes features of both varieties, are aware of the differences between American English and British English, and endeavor to use forms of the language which are easily understood.

This awareness is an essential communication tool in Europe, where an increasing number of people are now speaking American English. While British English is on the decline, the Americanization of the English language has helped to promote the development of Mid-Atlantic English, which is fast becoming the most common form of English in the European Union.

In this handbook there are descriptions of the most common differences in pronunciation, vocabulary, and spelling. There is also discussion of punctuation, grammar, and weights and measures.

Intended for the freshman college student, this book is a valuable reference for anyone who needs to know more about the differences between American and British English, as well as the way in which the English language is used in the European Union as an international language.
Log in to borrow